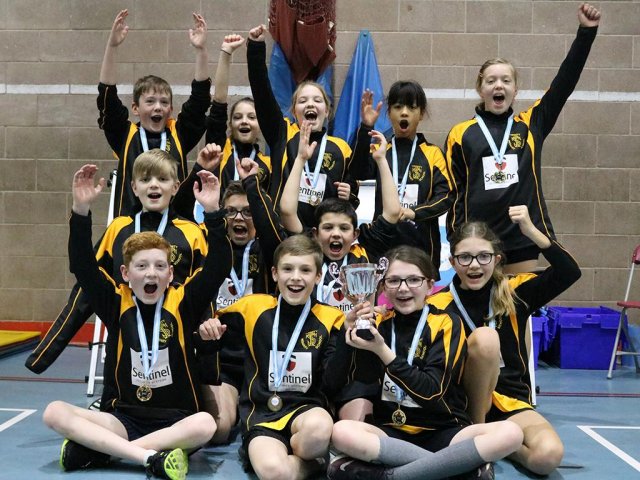 HUNDREDS of school pupils from across the county competed in the Herefordshire Winter School Games recently.

Over 400 children from 29 schools from across county threw themselves in to a sport-packed day at Hereford Leisure Centre.

The youngsters, aged between seven and 16, took part in 10 different competitions in six different sports which followed an opening ceremony hosted by David and Katie (young leaders from Aylestone).

Funded by the National Lottery, the Sport England programme aims to inspire millions of children and young people to take part in school competition, as well as participation events across the country.

Tim Knapp, head of the Herefordshire School Games local organising committee said: "Our school games are a fantastic celebration of what makes our community so special.

"Young people from across the county come together to participate and compete in a range of sports and they do so with honesty, respect and bravery."The games, organised by the local organising committee, Sports Partnership Herefordshire and Worcestershire and Herefordshire School Games organisers, were supported by 54 young leaders from local schools and colleges across Herefordshire.

Mr Knapp added: "The young leaders, responsible for running the day, acted as coaches and umpires and did a magnificent job. "I would also like to pay tribute to the organisers and to the schools who have given so much to make it a success. "Herefordshire should be extremely proud of an event that, eight years after it was launched as part of the 2012 London Olympic legacy, continues to go from strength to strength."

Trinity primary claimed the gold medals in the primary event continuing their success after winning it in 2019, with Colwall runners-up.

Weobley won the year seven and year eight girls competition ahead of Whitecross and Kingstone respectively.

Whitecross took the year seven boys honours ahead of Kingstone.

There was joint winners in the gymnastics competition with Kingsland and Fownhope taking the top honours ahead of Ledbury in runners-up spot.

There was also a host of inclusion competitions with Bishops winning the archery competition, Barrs Court taking the boccia award and Whitecross winning the new age kurling award.

School Games organiser, Kieram Hallam said: "It's great to see the excitement around sport and whether these young people are future Olympic medal winners or are just having fun with their friends and enjoying themselves through sport, you hope it's something they take with them through the rest of their lives."