"It is so rewarding!" Alan Gormley, an Inspiring Leader

"It is so rewarding!" Alan Gormley, an Inspiring Leader 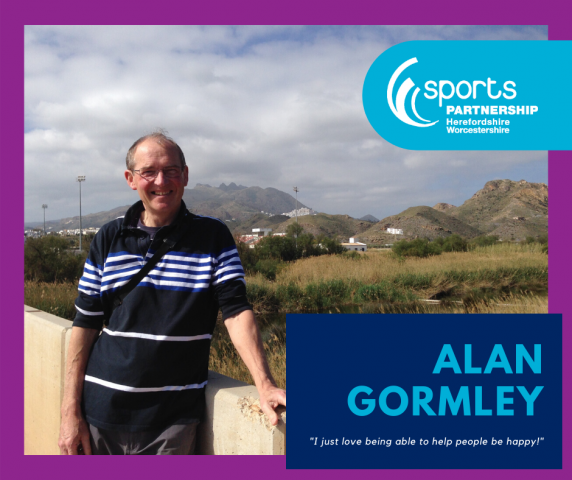 Alan Gormley was highlighted as an excellent nomination through the Sports Partnership Herefordshire and Worcestershire's Active Community Heroes scheme. His involvement with walking hockey led to recognition within the 'Inspiring Leader' category.

Alan began his coaching career 30 years ago, initially coaching on a part-time basis alongside his full-time employment. Due to his wealth of experience as a football and cricket captain, Alan embarked on his volunteer journey, getting involved with his local hockey club as there was no coaching team. Following this period, Alan made the decision to take voluntary redundancy and pursue a full-time coaching role.

Explaining his reasons behind volunteering and dedicating his time, Alan said, "I just love being able to help people be happy whilst improving their game". In 2017, Alan developed the Walking Hockey initiative in Bromsgrove, Worcestershire. and celebrates this through acknowledging that it is played in countries as far apart as Canada and Australia. The initiative has gone from strength-to-strength, across the globe, being played as far away as Canada and Australia.

At the core of Alan's inclusive sessions lies the motto: 'Fun, friendship and fitness'. Utilising the social benefits of sport and physical activity, the sessions begin with a 'walk and talk' exercise. Participants are encouraged to work with a new partner each week, warming up with a stick and ball whilst getting to know one another. The sessions then take a skill focus, if requested by participants, before moving into a 5 or 6 a-side Walking Hockey match. In addition to the physical sessions, the club hosts a monthly social, along with receiving regular newsletters and text messages.

Alan added, "we have grown into a family where everyone gets on together, where newcomers are welcomed with open arms and adopted into the family. The ability therefore to be able to relate to each person individually is really vital. The ability to take the lead when required without being the 'boss' is important. And, the odd bit of diplomacy comes in handy, though fortunately this is rarely needed."

The style adopted by Alan has been primarily influenced by his family. Adopting the role as a husband, dad, grandfather, son and brother Alan feels has taught him the softer skills involved in coaching, such as how to understand people, help them feel at ease and be able to communicate their desires and preferences . Before his coaching career, Alan's full-time role entailed management and leadership. Alan feels the management elements of this role aid his organisation, and the leadership with building his family – highlighting the transferable skills required in coaching.

We asked Alan what the biggest challenge is that he has faced as a coach/leader and how he managed to overcome it. Alan explained that the biggest challenge was having the courage to 'go' for it when hoping to set up the walking sports sessions – "I felt that there was a need and demand, but you can never be 100% sure. I therefore threw myself completely into the project to ensure the best chance of success. You need to have the self-belief and to be surrounded by people who you know you can trust to tell you how it is really going, not just how you yourself think it is going."

Finally, we asked Alan if he would recommend becoming a leader or a coach within sport or physical activity – "Yes! It is so rewarding. Not only do you get the opportunity to help people achieve positive things every single day, you also have the opportunity to improve and grow yourself daily - providing you put in the effort. To have someone say to you 'You have changed my life for the better' is worth the world."

Thank you Alan for sharing your story and for your significant contribution to activity in Herefordshire and Worcestershire.