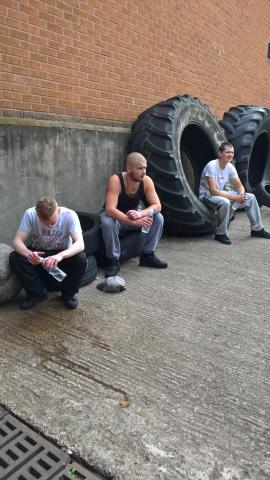 Healthier, Happier, Fitter, Stronger (HHFS) was a programme developed and run in partnership with Active Herefordshire and Worcestershire, Worcestershire CRC and Mettabox CrossFit Droitwich. Young people were identified as being in the 'contemplation' stage of the behaviour change model, having told their offender managers that they wanted to take part in sports or physical activity, however did not currently feel fit, or confident enough to do so.

As a result, HHFS was designed to engage participants in functional, fitness-based activities, whilst simultaneously increasing their individual development and promoting physical wellbeing. The project also focused on emphasising sustainable lifestyle changes to underpin their mental, physical and emotional wellbeing and facilitate lasting transformation.

After 5 project cycles, HHFS exceeded all expectations, with young people going on to complete PT qualifications, gain employment, and one individual winning the BBC Power of Sport Award at 2017's Herefordshire and Worcestershire Sports Awards.

75% of participants engaged in at least 50% of the project - a significant statistic given the chaotic lifestyles of these young people. Many of the participants had poor engagement levels with the Community Rehabilitation Company (CRC) but the engagement rates with both the course, and the individual's offender managers increased throughout the duration of the project. Outcome Star, an evidence-based tool for supporting and measuring change, was used to evaluate the impact of the project as it specifically focuses on individual development.

Self-assessment took place prior to and following completion of the project; young people saw an increase in all areas – aspiration, contribution, confidence, learning, people & support and communicating. Young people identified that they feel more confident, both in their physical ability, but also mentally. One young person reported that he has now stopped smoking, both cannabis and tobacco, as a direct result of engaging in the project as he identified the negative impact this was having on his ability to train effectively.