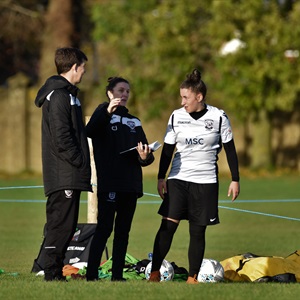 From playing to refereeing, there is a role in football for everyone; some of which you might never have considered. Over the next week Herefordshire FA will be speaking to inspiring women from across the grassroots game about what they do and why. If you are looking for some inspiration or a new way to get more active, then this series of interviews is for you!

First up they took the chance to talk to Carly Jacob, a UEFA B certified coach who currently coaches with the Hereford FC Womens first team and the Female Football Academy at Hartpury, where Carly also teaches.

How and when did you start coaching football?

Since the age of fourteen I have always been involved in football as either a player or a coach. I was a late starter in regards to playing football, it want a popular sport for females to play and therefore opportunities were few. I joined a women's team at the age of 14 and was incredibly fortunate to have progressed into academy football which enabled me to gain the exposure to play at a higher level.

My coaching experiences started voluntarily, working with local grassroot teams, both in the male and female game. Sadly an injury lead me to stop playing at the age of 18 and so I decided to increase my involvement in coaching.

What's changed from where you started to where you are now?

My early coaching journey consisted of working voluntarily within a range of grassroot clubs. Here I spent many hours working with a wide range of ages, abilities and essentially had the opportunity to think about my coaching philosophy. My enjoyment of coaching lead me into a career of teaching and I am a firm believe that the coaching and teaching professions complement each other. During my teaching and coaching career I have been fortunate to coach all over the world, including Middle Eastern Counties where females playing football has been frowned upon.

My teaching and coaching experiences lead to my position here at Hartpury College, where I teach on the Extended Diploma in Sport, Performance and Excellence Football course and coach the female football academy. This for me is a dream job as I am able to combine two passions of mine, coaching and teaching.

I have logically progressed through my coaching badges, these experiences have been so crucial to my development as a coach. Having completed my B licence just over a year ago, I am thoroughly enjoying implementing these ideas into my practises. I am hoping to progress onto my A licence in the future.

I decided to take on an additional role this season and that was to work with a women's team outside of the education environment. I have been fortunate to be a part the Hereford Women's Football team this season and have thoroughly enjoyed my time there. I am lucky to working with an incredible group of females who contribute so much to the female game and make my role there so enjoyable.

Have you faced and barriers along the way and how did you overcome them?

Who has had the biggest impact on you as a coach/ do you have any role models/inspirations?

The FA coach tutors who supported me through my B licence have definitely had the biggest impact on me as a coach. I have been challenged thoroughly which essentially has made me the coach I am today. My coaching journey has certainly been an emotional rollercoaster but I would change anything about it. I have learnt a lot about myself as well as football and coaching.

The best thing for me as a coach is to see individual players and teams develop over the season.

What does it mean to you to be a female in football/female in sport?

What would you say to any women who are thinking about coaching?/ Any tips you would give to someone just starting out.

Go for it. Take the opportunity to work with a range of age groups and abilities, find what you enjoy most. More importantly, be brave to try new things. Utilise those around you to gain knowledge and don't be afraid to ask questions.

If you are feeling inspired and would like to follow in Carly's footsteps by becoming a football coach then we can help! Herefordshire FA run Level 1 Football Coaching courses throughout the season and the FA have also launched the new "Playmakers" online course for learning the basics! Boys, girls, mens and womens teams are always on the lookout for new coaches; if you are considering getting in to coaching but don't know where to start, just get in touch and we can point you in the right direction for qualifications, mentoring, shadowing a coach or a club/team to get started!

For more information on coaching in the female game please contact:

Thanks to Carly Jacob for giving up her time as part of the #HereGirlsCan series & to Helen Warwick for the photos.